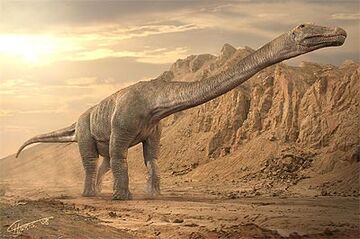 Titanosaurus (meaning 'titanic lizard' - named after the mythological 'Titans', deities of Ancient Greece) is a genus of sauropod dinosaur, first described by Lydekker in 1877. It is known from the Maastrichtian (Upper Cretaceous) Lameta Formation of India. Species assigned to Titanosaurus are also known from southern Europe and South America.

Titanosaurus was 9-12 meters (30-40 ft) long and weighed about 13 tons. Titanosaurus has traditionally been treated as a "wastebin taxon" for poorly preserved sauropod remains that demonstrate a distinctive vertebrae anatomy. The original Titanosaurus remains consist only of limb bones and a few vertebrae that have these characteristics. However, discoveries of more and better-preserved titanosaur species have shown that these once distinctive features are in fact widespread across many genera. Therefore, Titanosaurus itself is considered a nomen dubium ("dubious name") by most paleontologists, since the original Titanosaurus specimens cannot be distinguished from those of related animals.

Retrieved from "https://reptilepedia.fandom.com/wiki/Titanosaurus?oldid=5758"
Community content is available under CC-BY-SA unless otherwise noted.